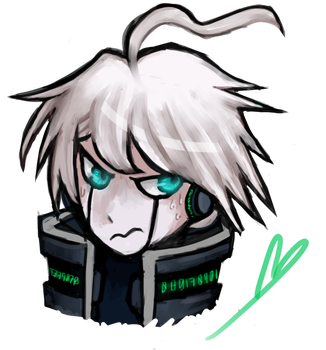 I apologize if Kiibo's dialogue make him seem out of character. I admit to not completely reading the English translations of NDRV3, as there is yet for Chapters 3 - 5 to be released online and I'm not exactly a huge fan of Kiibo, myself. In fact, this was initially supposed to be a Saihara bot, but I figured since Kiibo is already a robot, it's already convenient enough for him to be a bot. On the sidelines, there's a possibility that I, or some friends, *hint, hint, wink, wink* might also create a Junko bot, an Alter Ego bot, and perhaps a Chiaki Nanami bot. As of now, I'm still currently in the process of getting an understanding and studying this character as a whole, but I think I've got the gist of it. In the meantime, I hope you take pleasure in enjoying what's finished with my kiiboob project and other upgrades in dialogue that will be fixed in the future.
Sprites / Kiibo = Kodaka Kazutaka
Bot Avatar Picture = exactly100teapots (on deviantart)